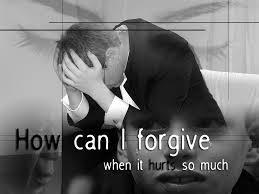 It wouldn’t be terribly helpful to ponder why forgiveness is hard without considering what exactly we can do to overcome the obstacles. It seems to me there is a lot written about the healing power of forgiveness but very little about how actually to do it. Here’s where spiritual conditioning can help us do the right thing, even when it’s difficult. These are the steps that help me.

1. Name the Action
I am looking for specific action verbs, here. Putting a name to the wrong done against me sets that action apart as unacceptable. It establishes a healthy boundary defining what is and isn’t ok with me. In the process of pinning down the exact action that upset me, however, I might realize the offense wasn’t so bad. Maybe hunger or fatigue exacerbated my response. Maybe my offender made a harmless remark that triggered a harmful memory. Realizing this gives me an opportunity to look deeper within for the true source of my resentment. It also allows me to release resentment for one who meant no harm.

2. Name my Feelings
The key here is a simple, blame-free statement. “When you X, I feel Y.” Most things that upset me result less from malicious intent than people intent on their own agenda, oblivious to repercussions. Showing someone the unintended consequences of his actions creates the opportunity for genuine remorse. Even genuine remorse might not pry the lid off my resentment if I fear being hurt again. A candid conversation about how to prevent repeat performances can restore trust. Sometimes wrongdoers have good ideas for that.

3. Own my Response
There’s no question that the absence of remorse makes forgiveness hard. The thing I do here is take the unremorseful offender out of the matter and focus on my side of the street instead. I take a cold hard look at how the wounds I received played a role in the wounds I inflicted, and I take responsibility for my actions. This is not victim blaming. It’s control claiming. Confronting my misdeeds leads to the realization that I stand in need of forgiveness, too.

4. Ask for Grace
I believe we act out our relationship with God in how we treat others. Recognizing how I treat God in the face of how God blesses me fills me with remorse and desire for renewal. When I can honestly say I care less about what my offender deserves than I care about restoring my relationship with God, I’m on the home stretch to forgiveness.

Join the conversation. Which step do you think is the hardest? Which helps the most?
Copyright 2013 Stephanie Walker All rights reserved. Visit www.AcrossTraditions.com.

“Forgive and forget” is a mantra from my childhood.  I wasn’t particularly good at either but notably bad at the latter.  Is forgetting part of the forgiveness process?  What exactly constitutes forgiveness?

A man I met in a reconciliation workshop had survived child abuse and the wreckage of several family members’ alcoholism.  The depth of his 50-year struggle for forgiveness made an impression on me.  In the struggle, it seems that what forgiveness is not can present as many obstacles as what forgiveness is.

Trust merits special consideration.  While forgiving is the moral choice, restoring trust might not be.  Should the parents of a child who has been molested by an uncle release anger and resentment for the uncle?   Eventually, yes.  Should the parents return to relationship with the uncle?  Maybe.  Should they trust the uncle?  No.  Evidence suggests molesters reoffend.  Neither family ties nor religious belief require anyone to ignore evidence.   Protecting a child is a parent’s moral obligation.  In this case, the moral choice is to release resentment and, if the uncle has genuine remorse, to return to a different kind of relationship without trust.  Note forgiving the uncle in this scenario would not absolve him of legal consequences for any crimes committed.

Forgiveness can be a struggle if one of the two necessary parts is missing.  This is true for the man in the reconciliation workshop.  His alcoholic brother is in denial and lacks the capacity for remorse, and the father who abused him died.  What can he do when there is no possibility of offender remorse?  Even without genuine remorse, there is hope for healing.

The hope starts with a journey inward–introspection.  Taking an honest look at how the wounds we received played a role in the wounds we inflicted, and taking responsibility for the harm we caused others, is a step that is completely within our control.  The very act of changing our wounded-wounding pattern severs the ropes that tie us to a wounded past.  Once free, we can release resentment and pray for our offenders, dead or living, to receive grace.  That does not make forgiveness complete, but it does create healing power.

Join the conversation.  How have you approached forgiveness when your offender lacked genuine remorse?