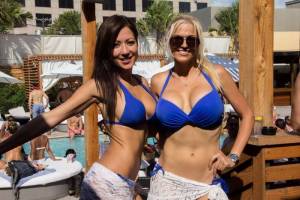 My local paper had this photo of scantily clad revelers on its main page most of last week. Unusual? Hardly.  The Dallas Morning News served a steady diet of bikini pics throughout the summer.  I ask, when did wearing skimpy bathing suits to public events become a good idea? Never mind. It was never a good idea. Perhaps the more salient question is:  When did it become a cultural norm?

I can shake my head at the 20-somethings in the photos, but my three teenage daughters can’t. They have to process media messaging somehow.  As a teen unhappy with her body, the models in Elle, Seventeen and clothing catalogs tormented me. But those models were clothed. My daughters are pelted with images of unclothed women, and like it or not, that media messaging establishes cultural norms and expectations. Teenage boys have always wanted to see skin (so I’m told), but now they expect to see it. Teenage girls feel expected to show it, and they do—both the girls with bodies that conform to cultural ideals and those whose bodies do not. Feeling pressured by (and moreover, complying with) cultural expectations damages self-esteem when the message is showing skin counts more than showing intellect or showing heart.

My daughters span a wide range of changing shapes and sizes. In May, one decided to avoid swimsuits all summer. She was relatively successful, even with a beach vacation. Where highs reached the low 70’s, lounging under a beach umbrella in shorts and a t-shirt was not only comfortable but also common among the fair skinned. More difficult was avoiding our sailing club.  Kids wear life jackets by law when sailing, so that wasn’t as problematic as the club pool (where adult behavior isn’t always at its best). When the others wanted to go, she dug in her heals or went to a friend’s instead.  Consequently, our family sailed less this summer.

Her plan broke down at her evangelical Christian camp, of all places. Although the camp went to lengths to protect girls’ modesty—no spaghetti straps, shorts less than fingertip length or 2-piece swimsuits—water sports could not be avoided. She survived, maybe by wearing t-shirts over her swimsuit, or maybe because it’s a place where showing heart counts more than showing skin.

Her quandary made me ponder covered women in the Islamic tradition. Several of my Duke Summer Institute classmates spent years in community with covered women. What my classmates relayed, and what Muslim women at the local mosque expressed, was a deep sense of freedom. Ironically, the burka westerners view as oppressive Muslim women view as liberating. They feel free to be themselves and to express themselves without being judged by appearances. They are utterly aghast at the pressures American women must resist to maintain their dignity, and they can’t fathom women presenting themselves as sex objects by choice. Conversely, covered women feel respected by men who don’t expect them to show skin for male attention, and they feel protected by a culture that doesn’t prize appearance above all else.