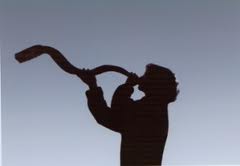 Elul stirs mixed feelings for me.  The last month before the Jewish New Year and High Holy Days is a time for reflection and preparation.  It’s a time when Jews take stock of their actions over the past year and decide what course corrections they need to turn back to God to live more just, loving and kind lives in the year ahead.  It is a magnificent invitation.  Whereas Yom Kippur sees “the closing of the gates,” during Elul, the gates are wide open for all who take the necessary steps to walk through them.  With such a magnanimous and loving invitation, why do we pause at the threshold or procrastinate taking those steps?

Several traditions ponder this human reticence.  There’s a Sufi story about Mullah Nasruddin searching for the key to his house.  He looks frantically outside under the lamp post and his neighbors come to help him.  After hours of searching, one asks where he was when he lost the key.  Nasruddin replies he lost it in his house.  “Why are you looking outside?” asks the neighbor.  “Because the light is better out here under the lamp.”

A friend who is in recovery from addiction described approaching the Fourth Step—searching and fearless moral inventory—in the Twelve Steps of Alcoholics Anonymous in much the same way.  When he got to the Fourth Step, he found his Twelve Step guide to be woefully lacking in helpful information for completing the step.  He bought a second guide and worked diligently through the first three steps but again found insufficient direction on the Fourth Step.  He bought a third guide and became increasingly frustrated that the book was short on answers.  At that point, he came to see that, like Nasruddin, the answers he needed could never come from an external
light but could only come from looking within.

Several Christian traditions observe preparatory and penitential seasons, namely Advent preceding Christmas and more especially Lent preceding Easter, during which introspection and confession are encouraged.  Although Catholics receive more exposure to this practice than other Christians, as many as 75 percent of US
Catholics report they never attend confession, or do so less than once a year.

Several traditions teach the only thing that can possibly stand in the way of God’s love for us is ourselves.  When we make ourselves vulnerable in the act of honest introspection, we are rewarded with intimacy with God and with self.  Moreover, when we expose ourselves to God’s power, he can help us make the very changes we seek.

Join the conversation.  In the face of an irresistible invitation, why do we resist taking an
honest look inward?